Why Do Cats Hate Closed Doors? 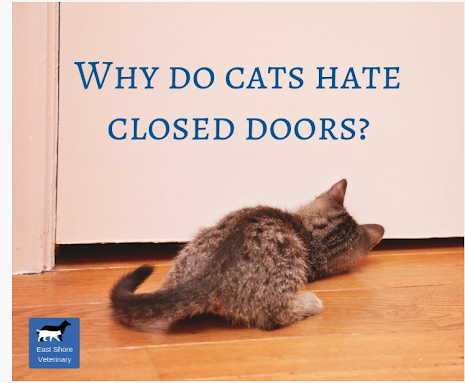 For many cat parents being a cat means being weird. Cats’ aversion toward closed doors, they see as one of their odd quirks. Some of them are even getting annoyed with their intrusion to the last refuge of their privacy as they perceive cats’ attempt to break into the bathroom. If you have ever though it was just your cat, veterinarians from Eastshore Vet, Madison animal hospital, explain that this behavior is typical for every cat. You may also want to read the possible reasons that shed light on why cats hate closed doors.

Why Do Cats Hate Closed Doors?

Some people believe that cats are attracted to closed doors because they are curious in their essence. Cats like to explore things and investigate. It is no wonder that a closed door will promptly get their attention and entice them to find out what is going on behind them.‍

Cats who hate closed doors are a universal phenomenon. It is not a sign that something is wrong with your cat, or that she needs more cuddling and playing sessions with you. Of course, it might be the case, but the truth is—they don’t care about your privacy. They simply don’t get it. Living in the world between the open doors is the way of cats.

Feline experts believe that even though cats led solitary lives in the wild, they are still social creatures. They make strong bonds with humans and like to take part in all family activities. From that point of view, pawing at the closed door reveals just an intention to share with their owner every single inch of space.

‍They Don't Want to Give up of Their Territory

Because of their territorial nature, cats believe they actually own your house. When you close a door, it is no wonder that many cats will try to open, scratch, or attack it in every single way. They may simply find your attempt to close a door as a sign that undermines their absolute reign of the territory.