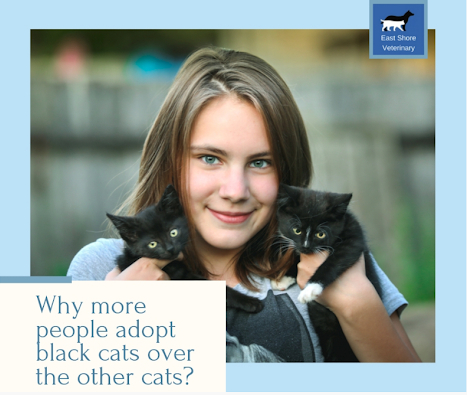 Black cats have been considered as being an evil omen for ages. Is this situation different today? Do people still believe in those myths? Do those myths still affect people’s decision to adopt a black cat? ASPCA claims that more and more people prefer adopting black cats over other cats. However, why are the black cats still the most numerous cat color in animal centers?

To answer these questions, veterinarians from Eastshore Vet, the pet grooming center in Madison, offer an interesting view on the black cat issue.

What Myths About Black Cats Are Still Present Today?

Modernization, science, and technology helpedpeople become more informed and educated about various phenomena in the world.Consequently, many false beliefs have already disappeared. However, some mythsand biases outlived their primitive roots and habits.

People who work in shelters report that the most common biases about black cats and bad luck are still present today. The intensity might be lesser, but the superstition has somehow survived. Despite the beliefs of Japan and Irish people about black cats and good luck, the myth of cats as the evil omen still subsists in Western society.

If more black cats are adopted, why do they outnumber the other colors in shelters?

Even though these myths are still present, many adoption shelters report that more and more people prefer adopting black cats over other cats. However, people who visit these centers to adopt a cat report that a majority of cats are still black cats. How do the shelters explain this notion?

According to them, the dominant coloramong cats is black. More than 30 percent of black cats enter the shelters. Tocompare the numbers, the second-highest cat color is grey and the grey catsparticipate with 22 percent in the statistics of colors.

The rate of adoption for black cats is pretty high, but there are still a lot of black cats out there waiting for their prospective parents.

What Can Be Done to Improve the Rate of Adoption of These Beautiful Creatures Even More?

The ASPCA has established Black CatAppreciation Day as the annual celebration of these magnificent cats. Thecelebration takes place worldwide every August. This example may inspire animalcenters and shelters to promote the adoption of black cats.

Additionally, they may want to educate people about the common myths and biases that accompany these astonishing animals. Learning how to take a great photo of a black cat may also help because it is hard to capture their shiny coat with a camera.