Fun Facts About Dogs You May Not Know 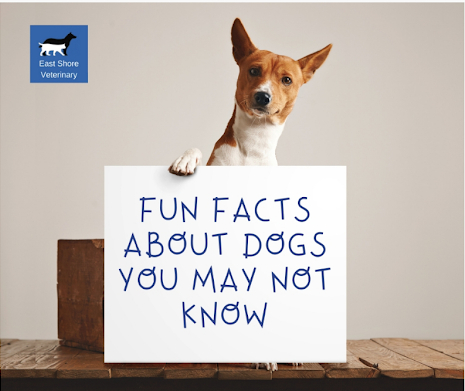 As the most loyal animals that accompany humans for ages, dogs have specific characteristics that make them so lovely. Dogs and humans share a long history of companionship. Through the years of cohabitation, people have learned a lot about dogs and their traits.

Since there are always things to learn, veterinarians from Eastshore Vet, the best dog boarding center in Madison, lists the following fun facts about dogs you may not know.

Dogs’ Sense of Smell Is About 1000 Times Better Than Humans’

Dogs use their sense of smell as a way to communicatewith other dogs and the outside world. Through sniffing other dogs, they learnwhat they’ve already eaten, where they’ve been, and whether they are pregnant.They also get information about other dogs, people, or animals when they aremiles away. This ability makes them perfect for looking for a missing person.

That stunning ability is based on a fact that dogs possess about 220 million olfactory receptors. As a comparison, humans have only 5 million. Moreover, the part of the brain responsible for processing smell is about 40 times larger in dogs than in humans.

Dogs Can Sweat Through Their Paws

One of the most common myths about dogs is that they can’t sweat. This observation might be true, to a certain extent, when you compare dogs sweat glands and their location to humans’. Indeed, dogs don’t sweat through their armpits.

Dogs, however, sweat through panting and their paws. You might occasionally notice that their food pads are wet. It is because of the localization of their sweat glands that are present at their paws.

This trait is scientifically proven. According to a study published in the journal Proceedings of the National Academy of Sciences, dogs tend to misbehave and refuse to take part in activities when a treat is given to their counterparts.

Dogs Are the Most Diverse Animal Kind

Dogs come through various shapes and forms. Scientists have concluded that they vary the most among other mammals by their size, color, and shape.

Only Two Dogs Breed Don’t Have a Pink Tongue

All dog breeds have a pink tongue except Shar-Pei and Chow Chow. These two dog breeds possess black spots on their tongues. While the spotted tongue is normal for these dog breeds, for other dogs it might represent the sign of an illness.

Dogs Know Where a North-South Axis Is

According to scientists, with their sharp senses, dogscan detect the Earth’s magnetic field. That explains why they move aroundrestlessly before they eliminate. What they try to do is to orientatethemselves in the right direction for some reason only they may understand.