Dogs May Have Developed "Puppy-Dog Eyes" to Melt Your Heart 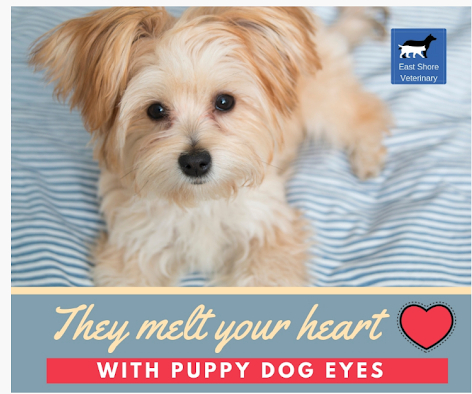 As a dog owner, you are most likely accustomed to a specific dog’s facial expression known as “puppy-dog-eyes.” Whenever your dog wants something from you like food or going outside, chances are you get that look. It makes your heart melt. No wonder that you willingly give him what he is begging for, whenever he wants. But, what science has to say about that? In this post, veterinarians from Eastshore Vet, the best pet hospital  in Madison, explain the recent findings on how dogs have developed "puppy-dog-eyes."

Dogs May Have Developed "Puppy-Dog Eyes" to Melt Your Heart

A new study published in the journal Proceedings of the National Academy of Science reveals that dogs have evolved a specific muscle responsible for the puppy-dog-eyes. This tiny little tissue has a role to make dog eyes wider, giving them a childlike look. Its function is to raise an inner eyebrow thus helping dogs to make that infant like face.

By comparing anatomy between four grey wolves and six domestic dogs, scientists have discovered this extra muscle in dogs. They believe that dogs developed this muscle as a part of the domestication process that took place 33,000 years ago. According to them, dogs who were cute enough to their prospective owners in prehistoric times had a better chance of being offered food and shelter. They evolved the puppy-dog-eyes as a survival tactic and then transmit this capability to their descendants.

Scientists have also noticed that dogs raise the inner eyebrow most often and more intensely when their owners or other humans pay attention to them. The dogs in their experiment didn’t raise their eyebrows because they saw food or trait in their owner proximity. Actually, dogs make frequent facial movements to meet the human gaze. It seems more like they were trying to communicate with people applying the most important rule of communication—making eye contact.

Next time, before your dog gives you “puppy-dog-eyes,” remember he is not making it for the sole reason of manipulation. He actually wants to talk with you. Praise him for that and give him that yummy trait.